Thousands of people around the globe have been touched by the life of my son, Gabriel William Stuart. Many of them I know; many of them I don’t know.

I can’t begin to tell you how many times I have encountered complete strangers who, after a quick few words, say “Oh, you must be Gabe’s dad.” His story has reached around the world, and has changed many lives. I am very proud of my beautiful boy who has given so much to all humanity.

It took the miraculous encounters that Gabe experienced to bring me to my knees in belief. I want to praise our savior, Jesus Christ, who sent the comfort of angels to Gabriel for many months during his illness. It was the angels who held his hand during his journey with cancer. It was his angels that changed my life. It was the angels who gave us confidence in our eternal life. It was Gabriel’s angels who gave me a definite belief in the life, death, and resurrection of our Lord, Jesus Christ.

It is my hope and prayer that this book will open your eyes to the reality of Heaven and help you discover a childlike faith that will lead you to eternal life in Heaven. If you have previously had doubts about the reality of the Bible, a sovereign God, Jesus Christ our savior, and divine messengers from Heaven, you can now “Stop doubting and believe.” (John 20:27 NIV)

Gabe had always told his mother that “Someday” was written for a “guy” to sing, but he was always too modest to sing the song himself.  Well, his wish came true on the day of his funeral.

One of the today’s most talented musical artists in the Contemporary Christian Music world, Aaron Pelsue, surprised us all with a perfect rendition of “Someday” during Gabe’s funeral service.

He sang and played the guitar to a perfect note, just as Gabe had written.

The Worst Day of my Life

Initially we were told that Gabe had an 80-85% chance of survival with this type of Leukemia. He had been through rigorous treatments of chemotherapy, radiation, and eventually a stem cell transplant. I had always believed that Gabe would survive this battle. I never in my wildest dreams thought that he might die. In our humanly naïve ways, we did all types of different rituals to assure we didn’t take any chances in losing our little boy. According to an ancient Japanese legend, anyone who folds a 1000 origami paper cranes will be granted a wish, such as long life or recovery from illness. A crane in Japan is one of the mystical creatures that is said to live for 1000 years. So, with the help of the kids in Gabe’s Elementary School, we folded 1000 paper cranes and strung them up in the house. Of course our 1000 paper crane wish was for Gabe to live a long life. Our pastor also told us of a verse in the Bible commanding anyone who is sick to call upon the elders of the church to pray over them. We scheduled a night to take Gabe into the church before an elders’ meeting. Each elder placed hands on him and anointed him with oil. They prayed individually for Gabe’s healing.

“Is any one of you sick? He should call the elders of the church to pray over him and anoint him with oil in the name of the Lord. And the prayer offered in faith will make the sick person well; the Lord will raise him up.” James 5:14-15(NIV)

Gabe walked out of our church prayer room that night saying “Dad, I got Jesus!” He said it just like the milk commercials running at the time; “Got Milk.” Gabe always found a way to make us laugh. Little did I know, at that moment in time, how true it was that Gabe “Got Jesus.”

Gabriel underwent a stem cell transplant in November of 2004. After an extensive matching process, the stem cells came from an umbilical cord blood bank in California. After the transplant, Gabe had an extensive stay at Riley Hospital for Children in Indianapolis, Indiana. A few months later he was able to come home to a very sterile environment. He was only home a week or so before he began to feel poorly again. Initially, the doctors believed that he had contracted an infection due to his compromised immune system.

It had been almost two years since Gabriel was diagnosed with Acute Lymphoblastic Leukemia. The doctors decided to conduct another bone marrow aspiration that afternoon. Gabe’s mother, Michelle, and I always stayed with Gabe during this procedure. We had been through numerous aspirations in the past. I remember noticing how hard it was for the doctor to extract the bone marrow fluid this time compared to past aspirations. Michelle later told me she knew that it was going to be bad news when she, too, noticed the density of the fluid.

Gabe was asleep when the doctors asked to speak privately with Michelle and me. “I am sorry, there is nothing more we can do,” they said, “Gabriel has relapsed again with a vengeance. We can try to make the next two to four weeks as comfortable as possible for him.” Michelle, with her motherly intuition, was not surprised. Certainly she was beyond upset, but she seemed to have a sense of realization at that moment. I, in contrast, was shocked and quite frankly mad. I recall having difficulty breathing and desperately trying to convince the doctors that there must be some sort of solution. More chemotherapy, another stem-cell transplant, etc. Every suggestion I frantically spit out was met with an objection. I couldn’t understand why the doctors weren’t planning out their next strategy of war against the evil cancer that had invaded Gabe’s body. This wasn’t supposed to be the way the story ended. The good guys always come out victorious in the end. I felt betrayed: betrayed by the doctors, betrayed by my Church, betrayed by my Pastor, and mostly betrayed by God.

I called our Pastor that day from the hospital. I couldn’t understand why the prayers, the anointing, and the other spiritual rituals had all been ignored by God. What type of God would be so… cruel to me, to my family, and to Gabriel? After all we had gone through in the previous years; Gabriel was my reason for life. Our Pastor, much to my surprise, offered no answers that day over the phone. I really expected him to tell me to turn to a page in my Bible which would explain everything to me. I think a part of me was hoping he had a hot-line to Heaven and would put in a good word for a miraculous healing by God. It didn’t take long to figure out that he really didn’t have a reasonable answer to give me. I now know that he was struggling with the “why” question himself. However, at the time, I am sure my anger was directed toward him and “his” God. 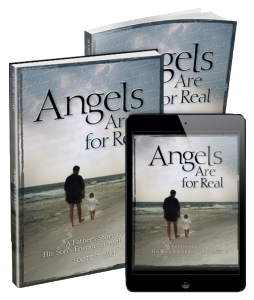 A portion of all proceeds from this book will be donated to: